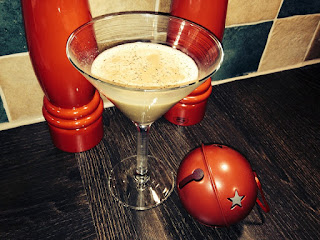 Well, it is a few days before Christmas and my last traditions post of the year. I hope that you have enjoyed some of the posts I have shared and perhaps learned along the way where some of our holiday traditions have come from.

While I enjoy the sweets of Christmas, one of the things that I look forward to every holiday is Eggnog. It is a frothy holiday drink made out of eggs, sugar, cream and typically sprinkled with some nutmeg.

Now some of you may be thinking...umm I think you forgot one of the main ingredients, but while many do spike their eggnog with Rum, it is not a required ingredient.

Eggnog came to the U.S colonies in the 18th century and originated as a wintertime drink. It is said that expensive liquors such as brandy and sherry were added to the drink to keep it from spoiling. This drink was not for the ordinary folk, but was shared among the British aristocracy before making it to the colonies.

When the drink made it to the colonies, the colonist substituted rum instead of the heavily taxed brandy or wine. The drink was first known as egg-n-grog as rum was referred to as grog and the bartenders served the drink in small wooden mugs called noggins.

So as you enjoy your holiday cheer this year, perhaps be light on the eggnog, not just for the alcoholic content, but for the added calories it packs as well. Some of these drinks are known to pack in upwards of 400 calories a glass.

To get you started on next years holiday recipes, I have found a fun recipe for eggnog courtesy of Allrecipes! Enjoy and happy holidays.

Image courtesy of:   https://pixabay.com/en/eggnog-cocktail-christmas-beverage-221043/
Posted by Monica taylor at 6:00:00 pm

Glad Egg Nog is NOT an Aussie tradition sounds gross!!!
Although it has started turning up in stores the last two or three Christmases.

Hi Monica,
I made this Eggnog and it really is amazing. Thanks for the recipe.
Happy New Year!
Valerija xx