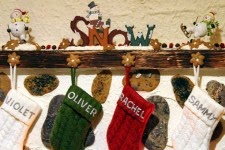 One of the many traditions right along side putting up a Christmas tree, is hanging Christmas Stocking from the Chimney. Now we all know that stockings are great to hold additional presents, but have you ever wondered how this tradition began? Well, let me share it with you.


The tradition of hanging stockings over the fireplace at Christmas is found to go as far back as 1823. There are many legends about why stockings are hung, but the most popular legend is about a widowed man and his three daughters. They were very poor and felt that their status would make it difficult for them to marry. St. Nicholas heard the family's plight and wanted to help.  Knowing that the daughters hung their laundered stockings by the fireplace and that their father would refuse any kind act of charity, St Nicholas slid down the chimney and placed gold coins within the stockings. Because the girls now had a nice bounty, they were eligible to marry.

Some of the more popular items to wind up in stockings were oranges. Many say it is because fresh fruit was so hard to come by and finding an orange at the bottom of your stocking was considered a great treat.  Another version is that when St. Nick visited the three girls, he left three gold balls in their stockings. Because this tradition is not easily replicated, oranges were substituted.


One known fact is that you definitely don't want to find coal inside your stocking. That is a sure sign that you are on the naughty list!

Fun story, especially the last line! Thanks for sharing!