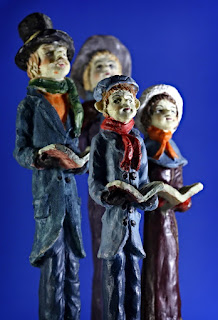 One of my favorite holiday traditions is singing Christmas Carols. Now I have to admit, I have never gone Christmas Caroling, but I certainly love hearing all the Christmas songs. I think that is why I love visiting Disneyland during the Christmas holidays. They have old type carolers and they are so fun to listen to.  So how did this tradition get started?

Caroling started in Europe thousands of years ago, but at that time the songs were not of Christmas. These were songs the Pagans sang at Winter Solstice celebrations.  The word "Carol" means dance or song of praise and joy.  They were written and sung back then during all four seasons, but the only tradition that has survived is the singing of the Christmas Carols.

In AD 129 a Roman Bishop said that the song "Angel's Hymn" should be sung at a Christmas Service. With this idea, many composers started writing Christmas Carols for the church services. These songs were mainly written and sung in Latin and were not popular amongst the people as they could not understand them.

In 1223 St. Francis of Assisi started Nativity plays in Italy where the people in the plays sang songs that told a story.  They were sung in all languages so that the people watching the play could understand and join in.

Before carol singing in public became popular, there were official carol singers called "Waits." These were a band of important  people within the towns and villages who sang on Christmas.  Many orchestras and choirs also started to be formed at this time in England so that Christmas songs could be sung.  Carol services were created as well as the custom of singing carols in the streets.

Today the tradition still holds strong. Many churches hold candle and carol singing services every year at Christmas time. These services have become some of the favorites. While we may not see many carolers on the streets anymore, it is still a fun tradition shared amongst family and friends.