CHRISTMAS DINNER AROUND THE WORLD, Part 2

Christmas Dinner Around the World, Part 2
No matter the holiday nor the place you call home, food plays an important part in celebrations. Conversation, laughter and memories shared over a meal bring people closer together. Continuing my investigation into what people serve for Christmas Dinner, I took a look at a few countries in Europe, where the main meal is often celebrated on December 24, and not a speck of turkey is to be seen.

In Germany, where roast goose and red cabbage are the kings of the Christmas table. Legend has it that those who do not dine well on Christmas Eve will be haunted by demons – so there’s no excuse not to squeeze in that extra slice of Stollen. Since I grew up on my grandmother’s German recipes, we always had a turkey and a goose at Christmas. 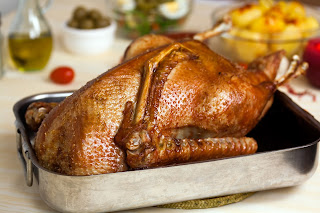 (Shutterstock.com/a9photo)
Growing up on a farm, Gram had a very interesting way of using the grease from the Christmas goose (and that’s 80% of what that bird is made up of). She would gather the goose grease in empty jars and refrigerate it. She would feast on rye bread spread with cold goose grease and salted. Before you say, “Oh, yuck!”, she lived to be 104-1/2 years old! 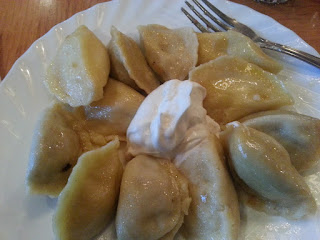 In Poland, people tuck into an enormous banquet called Wigilia or the Star Supper, featuring dishes such as borscht and dumplings.
I went to my first Polish Buffet restaurant, the Jolly Inn, last month. I had never before tasted pierogis or dumplings. I like my pierogis with sour cream, and as you can see, I’m a fan now!

In Southern Italy, many families avoid meat on Christmas Eve in favour of The Feast of the Seven Fishes, where gourmet dishes such as fried eel are served along with pasta. 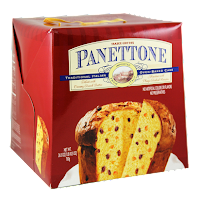 The most popular dessert served on Christmas Day is Panettonne, which is a sweet bread cake with raisins and orange zest.  This dessert can be found in most U.S. grocery stores around the holidays (this is one of my Gram’s favorites, as well).

Christmas Dinners in Denmark can include roast pork and duck, boiled potatoes, brown sauce, a type of gravy to go on the meat and potatoes, red cabbage, Christmas beer (sounds good to me), and Æbleskiver, 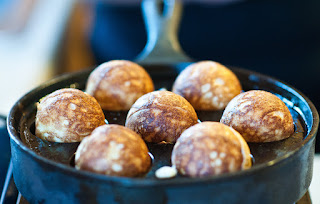 You know, all this talk of food makes me want to do some holiday traveling someday. Maybe a “tour of Europe”, hopping from country to country, restaurant to restaurant??? Maybe??? Anyone with me???
Posted by Pat at 5:00:00 pm

Email ThisBlogThis!Share to TwitterShare to FacebookShare to Pinterest
Labels: Christmas Dinner round the World Part 2